“It’s extremely rewarding – and you meet some fantastic people” 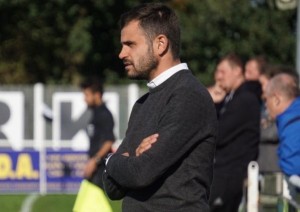 Many of today’s most prominent local football figures have played an important part in the development of disability football. One case in point is the new Hallam FC Manager Craig Denton – who spent a large part of his career working with footballers living with disabilities, helping to grow local levels of participation.

Craig was kind enough to put his Sandygate Manager’s ‘to-do’ list to one side to talk to the South Yorkshire Ability Counts League website about his career and his involvement in Community football; and as we’ll see, Craig had an important part to play in the early days of the SYACL.

We started, though, by asking Craig about his new job at the Oldest Football Ground in the World.

SYACL First things first, Craig. You recently took on the Manager’s role at Hallam. How did that come about, and how are things going in these unusual times?

“I was delighted to have been presented with the opportunity to manage Hallam Football Club,” Craig told us.” I wanted something closer to home after leaving Barton Town due to my wife expecting our first child. Hallam stand out in Sheffield as a well-run, well organised and ambitious club who want to start trying to push on. That’s certainly something I want to be a part of.”

SYACL Many people may not know about your association with Disability Football at Sheffield Wednesday. Tell us about your role; how long you were there and what you achieved.

“I worked for about 12 years at Sheffield Wednesday Community Programme,” Craig explained. “I loved my time coaching in schools and really driving the programme forward. Then the Disability Community Officer role came available, so I applied and was successful in getting the job.”

“I had lots of involvement with local Specialist schools and worked closely with the County FA to increase participation in all disability sport.”

SYACL As an experienced coach, what would you say were the major priorities in working with players living with disabilities?

“Working with players with additional needs is extremely rewarding as it gives everyone an opportunity to flourish and excel in what they love; and the results are amazing.”

SYACL Finally, Craig, what would you say to anyone thinking of becoming involved with disability football?

“I’d certainly recommend for any up and coming coach to get involved with disability football; it’s extremely rewarding – and you meet some fantastic people.”

The SYACL would like to thank Craig for speaking to us, and we wish him well in his new role.